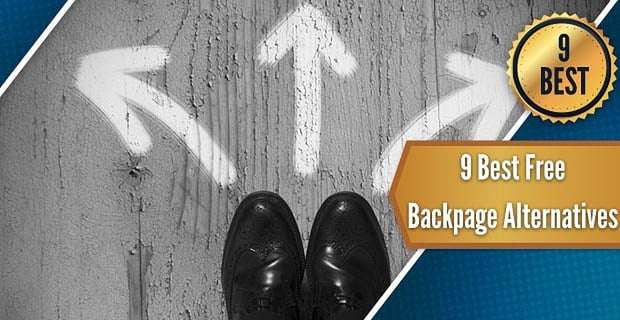 Looking for free Backpage alternatives, but not sure where to look? Below we’ve compiled a list of the top options for those who miss the convenience of the free Backpage personals. But first, here’s a look at the website’s controversial backstory.

Backpage was a classified ads website that was founded in 2004. However, US authorities, including the FBI and Department of Justice, seized control of the site in April 2018 after an investigation found that Backpage allowed — and even encouraged — people to post ads related to prostitution and human trafficking. Backpage CEO Carl Ferrer pleaded guilty to conspiracy and money laundering, among other things, and could serve five years in prison.

Since then, former Backpage users have been scrambling to find a more trustworthy alternative, so we decided to compile a list of nine sites we think can provide an experience like Backpage used to — but without the deceit, untrustworthiness, and horrible crimes.

BeNaughty has been around for years and has mastered the art of hookup matching. The site uses your location and preferences and scours its user base for compatible people, and then it sends them to your inbox every day. If you’re interested, you can send flirty winks, suggestive icebreakers, or private messages (more than 8.5 million messages are sent on BeNaughty every day).

They say you can never have too many friends, and Adult Friend Finder can definitely help you find some, if by “friends” you mean “sex buddies.” The company was founded in 1996, and it’s always been about allowing people to express their desires without feeling shame. It doesn’t matter if you’re looking for a one-time hookup, long-term affair, swinging relationship, or any other casual encounter — you can be yourself on Adult Friend Finder.

FriendFinder-X is one of the largest backpage alternatives in the world, and you can join the community in just a few steps: 1) Select your gender and relationship status (couples are welcome, too). 2) Choose the gender and relationship status you’re interested in. 3) Upload a photo or two. You can then fill out more information, or you can get right to browsing. The whole journey is up to you!

Flirt.com is similar to Backpage because it’s free to join and doesn’t require people to browse under their real names or even upload a photo if they don’t want to. The casual dating site keeps things as anonymous as possible — by asking for an age instead of a birthdate, for example — so that singles feel comfortable seeking sex in this online forum. It won’t cost you anything to take a look around the hookup site and create an account if you want to start chatting with sexually active people.

LesbianPersonals, as you can probably tell by the name, caters to lesbian singles and couples who just want no-strings-attached relationships — nothing serious. Millions of women of varying age and background, and hailing from all over the world have signed up for the site — and more are signing up every day. You can sort through them by age, background, type of encounter, location, appearance, and many other identifiers.

Backpage wasn’t all about hooking up, so if you’re more interested in dates and relationships, we definitely suggest Match. Launched in 1995, Match was one of the first dating sites to exist, and it’s led to more romantic connections than every other dating site out there. Once you post your profile, which is free to do, you can start looking for matches on your own, but Match will also make at least five match recommendations every day.

Ashley Madison is a global dating site that helps you not only find affairs but also threesomes and other exciting sexual and/or romantic encounters. It’s very popular among men and women, and it’s free to sign up for. A variety of features are free to men to use, and all the features are free for women to use. Your safety is also a top priority at Ashley Madison, and it has been encrypted to help protect your private and personal information.

Head to the Personals section of ClassifiedAds, and from there you can choose Casual Dating, Men Seeking Men, Men Seeking Women, Missed Connections, Women Seeking Men, or Women Seeking Women. Browse through the listings until someone catches your eye. Then you can see when they created their listing, when it was last updated, when it expires, and how many times it’s been viewed. You won’t have to pay to send a response either.

We’re All Better Off Without Backpage

What Backpage’s team did was despicable, and we’re all in a better place now that the government got involved. However, if you’re missing some of the genuine resources Backpage provided, like adult-focused personals, you’ve come to the right place. The nine sites in this article can help in that department, and they promise to have your safety and best interest at heart.

23 Most Popular Dating Sites (That Are Free to Try)

13 Best Millionaire Dating Sites (That Are Free to Try)