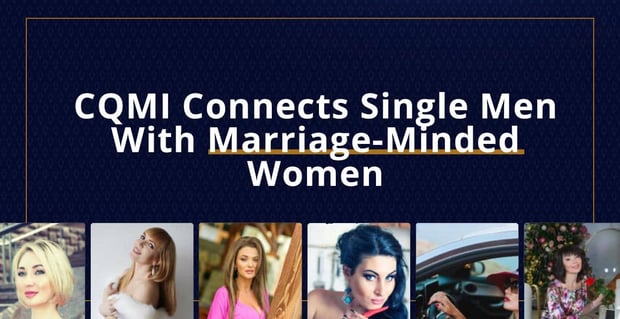 The Short Version: Matchmaking company CQMI connects Western men with Ukrainian women and facilitates international marriages. CQMI is a helpful resource for singles who believe in traditional gender roles and are willing to travel for the sake of love. CQMI carefully screens both men and women for suitability and then pairs up like-minded couples on the dating site and during in-person events. A team in Kiev can help men get to know attractive Slavic women and travel to Ukraine to meet promising dates.

Antoine Monnier, the co-founder of CQMI, said he has had an interest in Russian and Ukrainian culture throughout his life. Originally from France, he moved to Montreal in 1998 as an adult, and he traveled frequently to Russia and Ukraine for business and pleasure. He visited St. Petersburg, Moscow, and Kiev and became fluent in Russian.

CQMI co-founder Antoine Monnier has traveled to Russia and Ukraine many times.

During his travels, Antoine learned to appreciate the beauty and kindness of Slavic women, and he realized he wasn’t alone in his attraction. Many single men in North America are interested in dating and marrying Ukrainian women. So, Antoine decided to do something to connect love-driven romantics in the East and West.

As fortune would have it, one of the company’s earliest pairings was Antoine and his future bride.

“I met her while I was founding the agency and was looking for partners,” Antoine said. “I didn’t want to meet her at first. I had an evening in Kiev when I was free, and my partners forced me to meet her. Then, we fell in love, and that was the beginning of our love story.”

Antoine’s wife is now his partner in life and in business. She works alongside the CQMI team to screen single Slavic women to make sure they want to meet North American and European men for the right reasons. The Canadian team regularly travels to Kiev to consult with their coworkers on the ground.

“My wife is a good matchmaker,” Antoine said good-naturedly. “The women are more flexible and understanding in taking advice. My wife has a better way of explaining to women why a man is good for them than I do!”

Before COVID-19, Antoine and his wife would travel to Kiev four times a year to work with their matchmaking team. The Kiev office is always busy screening local women, arranging personal introductions, and answering questions about immigrating to North America or Western Europe.

Recent travel restrictions have made this work more complicated. CQMI had to pause some of its travel-based services in light of the pandemic. However, the team continues to welcome members for the virtual matchmaking experience.

The single men who seek out CQMI are usually over 40 and serious about marrying the right woman. They tend to value more traditional relationships where men and women have specific roles in the family.

The company carefully reviews its male members to ensure they are well-intentioned and financially stable individuals.

“We have to be careful because sometimes some men are not nice enough for the women. If a man isn’t dating appropriately, we remove him,” said Antoine.

Prior to COVID-19, CQMI would plan regular excursions for single men to meet women in Kiev.

Single men have two membership options at CQMI. They can get a monthly contract to access the online database and make their own travel arrangements. Or they can choose the romance tour option and spend 10 days meeting single women in Kiev. CQMI organizes dates with a translator on hand to help couples overcome a potential language barrier during their first meetings.

Of course, international travel hasn’t been possible in the midst of a global pandemic, so Antoine devised a new system to match North American men and Ukrainian women.

“It’s a subscription where men and women can exchange contacts and chat online using Skype,” he said. “If they hit it off, then they can find a way to meet either in Ukraine or Canada.”

CQMI is a matchmaking company, not a dating site. That means single men and women are not left to find a perfect match on their own. Plenty of personalized assistance and support is available from the first introduction to the marriage preparations. The company has an extensive knowledge about immigration laws in the U.S. and Canada, and it provides help for couples as they prepare for their new life in North America.

Antoine has been working in the international dating industry for years, and he offered his insights into why Western men and Slavic women make a great match. He explained that Slavic women have a different mentality about relationships than Western women do. Slavic women tend to be more traditional and look for a partner who will be a strong family man and provider.

The CQMI website compares today’s Ukrainian women with the traditional American housewife of the 1950s. Such a woman is a rare find in Western culture where women make up over 45% of the workforce.

As part of the matchmaking process, the CQMI team advises Western men what to expect when building a relationship with a Ukrainian woman. For instance, it’s customary for men to pay for women on dates. If it’s a first meeting, the Slavic dating experts recommend men come bringing flowers, chocolates, or a gift.

Generally speaking, the Slavic women who join CQMI expect their husband to be the breadwinner and are willing to do their part by relocating to be near his work, taking care of the housework, and caring for their children.

The Slavic dating scene may have different etiquette and expectations than the Western dating scene, but it also has a lot of similarities. Singles are just as interested in physical attraction, and they often want to go on multiple dates before making a major life commitment.

Some North American men seek Ukrainian wives for superficial reasons, but the CQMI team emphasizes that core values are just as important as looks.

“A lot of men are looking for a big age difference and a very sexy woman, and they don’t pay attention to the criteria that will make the marriage strong,” Antoine said. “I encourage them to think about what would actually contribute to building a lasting connection. Sometimes, they need a bit of help from a professional.”

International couples also have to navigate cultural differences as they form a new relationship. That’s why CQMI has an established office in Kiev and hires locals to provide advice to male clients.

CQMI got into the matchmaking business to create long-lasting relationships, and the team works diligently to match marriage-minded singles. Western men and Slavic women can change their futures with the help of this dedicated service.

Since the company was founded, the team has facilitated more than 150 weddings, the majority of them in Canada.

Antoine told us the story of a Slavic woman who turned down a match with a Canadian man because she thought he was too old for her. However, the CQMI team was persistent in talking the man up and encouraging the single woman to keep an open mind. “He had good qualities, so eventually she agreed to meet him. Now they are married and live in Canada. She had a baby last month,” Antoine said.

What’s next for CQMI? The team is planning to return to Kiev in the upcoming year and continue facilitating in-person connections between Western men and Slavic women. Antoine told us he’s very much looking forward to returning to Ukraine once it’s safe to travel.

“We’ve had a hard time since the pandemic, so it’s been tough. We’ve excited to get back to normal,” Antoine said.